The owners of a residential property in Kanahooka, New South Wales, were concerned about the back of their house sinking and that considerable damage might occur if left unchecked. A large crack had formed in one of the walls and cracks had appeared along the ceiling cornice of three separate rooms. The damage indicated that the entire back section of the house was subsidising relative to the rest of the building.

The largest crack ran from the floor to the lintel on the back wall adjoining the neighbouring house and had split through the bricks rather than along the mortar lines. Significant ground subsidence had led to the walls settling up to 54mm across approximately 17 lineal metres. The settlement had also affected two of the doors which would swing open whenever they were not closed properly.

Mainmark applied its proprietary engineered resin injection solution, Teretek®, into the foundation ground along the external walls at the rear of the property. The deep-lift resin injection application method aimed to maximise the ground bearing capacity beneath the home and provide a long-term solution against the risk of further subsidence.

Mainmark completed this project in one day. There was limited disruption to the homeowner, with no need to use any excavation or cost prohibitive, traditional underpinning methods. 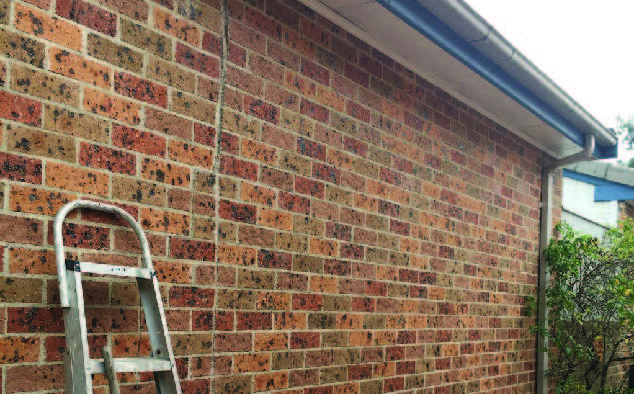 Mainmark was required to raise, re-level, and re- support the home across 17 lineal metres at the rear of the property. The solution was required to address the separation at the lintels on the external walls, helping the internal doors to function as designed.

Teretek® engineered resin was to be applied to the foundation soil beneath the footings to help lift the back portion of the property while improving ground bearing capacity to reduce the risk of further subsidence.

The use of Teretek® would minimise disruption to the homeowner, eliminate the need for demolition or invasive excavation, and cause no noise or mess.

Mainmark’s engineered resin injection solution, Teretek®, was applied beneath the external walls at the back of the home in a U-shape formation, to strengthen the ground beneath the foundations, and re-level and re-support the home.

Teretek® is a two-in-one engineered resin injection solution that can increase ground bearing capacity while also re-levelling structures, in a process that is likened to keyhole surgery. On entering the ground, the polymer resin solution mixes together and quickly expands, strengthening the soil and re-levelling buildings quickly and efficiently.

Teretek® was specified for this project due to its controlled application process that avoided the risk of adding further undue stress on the building during the lifting process. Teretek® was injected deep into the soil at depths of 600mm to 1800mm while the Mainmark team constantly monitored the process using laser levels to track the foundation lift millimetre by millimetre.

The Teretek® solution was able to successfully underpin and raise the double brick, rear portion of the home quickly and safely. It was also able to address the separation at the lintels and close the large external wall crack, resulting in the doors operating properly for the first time since the crack occurred more than two years prior.

This successful project was completed in a single day and the fast completion time minimised disruption to the occupants. The solution has also provided the family with peace of mind knowing that their home is now stable and liveable into the future.

the Mainmark team was very friendly and hard working. They have also given us the assurance that the house is now stable. I’m very happy with the work that they did. 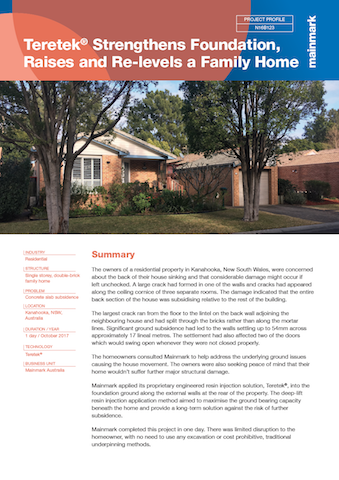 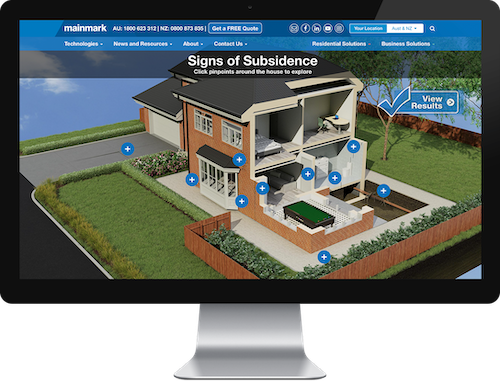